It’s a beautiful day and I’m trapped at my desk. I should be spending my lunch break outdoors with a sandwich and a park bench. Instead, I’m daydreaming and blogging about sewing.

Makes sense that my head would be filled with fabric and seams…this is the week I chose to return to weekly sewing after kicking off Operation Sew Balanced (something I’ll be continuing a while longer). I’ve been working on a garment for this week’s “Tickled Pink” Challenge and have been steadily focused on it all week. 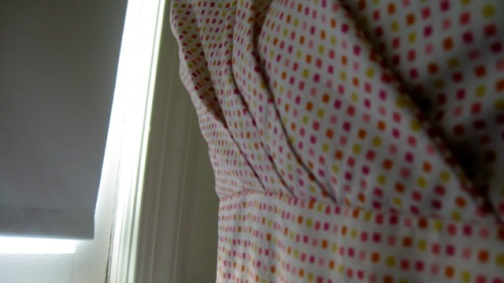 Now, of course, there’s little bits of life in between sewing and working, but the consistent return to sewing and steady progress (vs. a marathon weekend of sewing in pajamas with only take-out menu reading breaks) has been nice for me. I should finish it in time to post it on Friday.

Now, if I my brain would just stop virtually installing zippers, I could get back to work, wrap up my corporate duties, and do some live action zipper installations 😉

My first week without a sewing challenge is almost over. I’ve managed to engage with my world a bit more and its been lovely feeling all feng shui inside. Even resuming my daily strolls with the mutt has proven to be therapeutic for both of us. 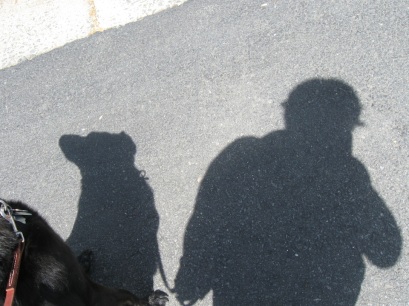 She sniffs and marks while I take in some sun, observe the state of the neighborhood, and let my brain work out the mush in my head. On this particular walk, I settled on a final (for now anyway) pattern for the list of spring/summer dress patterns I started keeping on a pinterest board. Each of the dresses is simple in silhouette and design with construction that won’t require heroics too far beyond my skills. When I go back to weekly sewing, constraints like that will keep me from drowning in a sewing project and letting it consume my focus like an eclipse.

We walked over to the community pool. More sniffing and marking for the dog. Another chance to think about sewing for me. 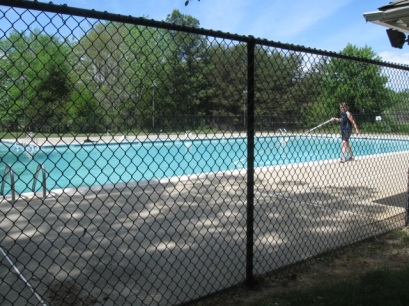 EYES: Hey, look at that! The HOA’s got those Lifeguard interns cleaning the pool already.
BRAIN: What? It’s only April! Wait. The pool opens in May. That’s soon. Shouldn’t you be thinking about fixing that side-boob issue on the bathing suit pattern from the Down Under challenge?
EYES: Wow, the water’s so pretty and blue.
BRAIN: Do you really wanna deal with that pattern again and risk effing up a FOURTH prototype?
EYES: I can’t see the jacuzzi on the side or the pool slide they had up at last year.
BRAIN: I know! Just buy that McCall’s swimwear pattern with the multi-cup sizes and you can sew up a suit hassle-free. Yeah, so you can have something to wear when you finally buy a season pass from the HOA and go hang out at the community pool for the first time in the NINE YEARS you’ve lived here!

The restless sewing chatter in my head slowed down long enough for me to enjoy a fresh batch of my husband’s cashew nut butter with slices of organic Lady Alice apples while listening to him tell me about his day (instead of giving him a monologue about some garment that was eating me alive). I even lovingly tolerated a YouTube tangent he had to share so I could know how fig newtons are made. 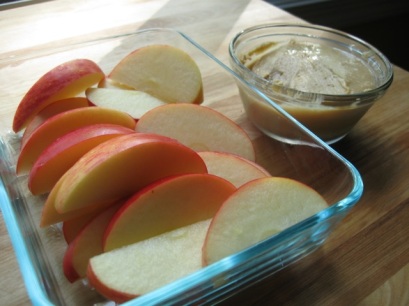 The other areas of my life have been getting similar moments of quality time.

The key will be to keep up this trend when the self-imposed pressures of weekly sewing challenges are back in my life.

What do you rely on to keep you in balance?

I had a glorious plan. It involved a blue and white pleated skirt, pretty red blouse and a photo shoot on the steps of the Lincoln (or Jefferson) Memorial. Last week’s City Inspiration challenge would have ultimately ended in me tolerating the 25 mile drive to D.C. (and its spring tourists) for DIY fashion’s sake. Instead, the challenge week came and went…with only my seam ripper to curse and tolerate. 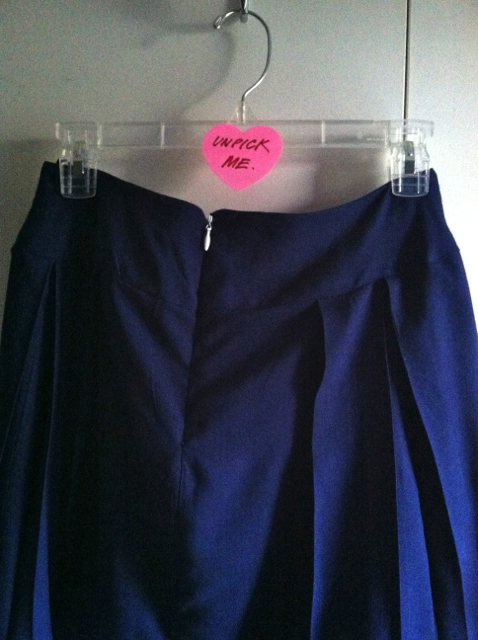 Somehow, all of my careful measuring, slashing, spreading, and prototypes of the skirt yoke (to make it fit my semi-heart shaped hips) resulted in a waistline that was just over an inch too big once made up in garment fabric. Either, I wasn’t so careful with my measurements or the fabric stretched on me during construction. Whatever the case….Grrrrrrr!

I am going to have to get all CSI about the situation to find out where I went wrong. Not before I go ahead and unpick the three or four seams necessary to correct the waist fit, though. This fantastic skirt must eventually be made wearable!

The deconstruct-reconstruct marathon could not be done in time to photograph and blog the outfit for my Sew Weekly contribution, so I acknowledged the omen, unfurrowed my brow and set out to make the most of a much-needed intermission from the weekly sewing challenge.

Thirteen weeks of relentless garment sewing has finally caught up with me. I’ve been totally consumed by this awesome personal challenge and looked up last week to see that my life’s been hovering at craft-o-clock (or blog-thirty) for over three months. I’m having a blast (seam-ripping rages and all), but the other areas of my life could use some TLC, too. 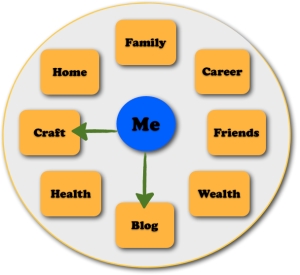 Over the next couple of weeks, I shall tighten up my life’s routines a bit so my sewing time is less crazed and obsessed and more harmonious with my other responsibilities. 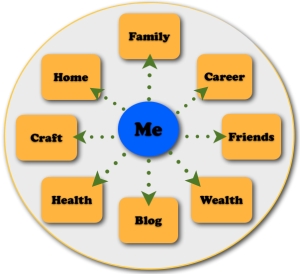 Here’s just a hint at how out-of-balance things have gotten for me:

So, my new mission (which I have chosen to accept) is to devote more attention to the neglected areas of my life over the next couple of weeks WHILE figuring out how to improve my sewing workflow.

I’ll still be sewing, of course. I’ll just be a little less zealous and OCD about it. Which is a good thing, because my sewing machine was about to put out a restraining order against me.

Ran into recent photos of Mood Fabric’s New York warehouse on their blog.

I WANT TO GO THERE.

I visited the Los Angeles store a couple of years ago and nearly passed out in the aisles. Mood’s NY warehouse photos make me dream of what I’d behold if I worked for FedEx and made their deliveries. I’d totally get fired for never being on time to my next delivery.

I go back to work tomorrow after a handful of impromptu days off. It was a much needed break from the day job. Not necessarily for fun and travel, but for life maintenance and mental health. You the know the kind. Most of my staycation was analog. Except for my sewing machine and the occasional IMDb search to settle a movie casting argument, I managed to remain unplugged. So, I’ll be doing some catch up posts soon.

For now, a few shnibbets… 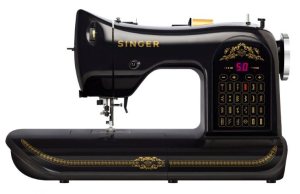 Just barely out of the box. Still haven’t even used the auto-threader. For the last two weeks (while finishing in-flight projects on my old Husqvarna), it’s been this pretty decoration on a fold out table. I don’t even know where it will ultimately live, but I’ve welcomed it into my life just the same. Think I’ll even hold out on giving it a name until I see how it sews. Beauty before function. It’s how I roll sometimes.

Michelle Obama, my favorite First Lady and stylecon, is pulling off a yellow-orange colorblocked outfit with purple (worn for the White House’s annual Easter egg roll)! Bold and smart. I dig it. Let’s see…yellow and orange pairs well with PINK (thanks, Jenni), PURPLE (merci, Mrs. O), BLACK (as demo’d by my dressform), and BLUE (a suggestion from the always-clever Gina I still have to try).

This week’s challenge at The Sew Weekly is to sew something inspired by a favorite city or locale. There is an image of a city on my homepage sidebar. It’s a scene from a movie. I will reward a small, mystery gift to the first person who can tell me the name of the movie. Leave a comment with your outrage.

UPDATE: OK, I suck. I accidently posted the WRONG picture! This is the movie image I meant to put on my sidebar.

And, this is the photo I mistakenly had up there. 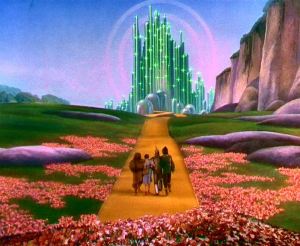 My poor, neglected blog. Sewing a garment every week has been this breathless, thrilling, and crazy distraction in my life. These days I can barely keep up with my laundry, let alone a website. Though, I am getting the hang of things over at The Sew Weekly. That means there’s hope yet for this place.

We’ve completed seven garment challenges so far and I’m going to give a brief recap of what I made for each. After this post, we’ll just consider ourselves caught up and I’ll move on to where my head’s really at: next week’s “Refashion” challenge. 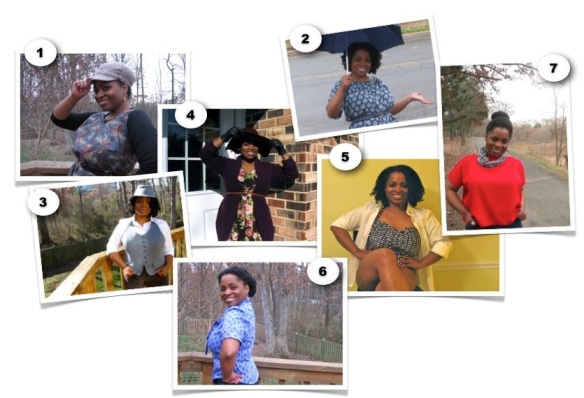 Week 1 Challenge: You Can Do It! Introduce yourself & share a favorite garment of 2011.
I shared the “Meet & Greet” Tunic and little bit about myself in a brief interview.

Week 2 Challenge: Accessorize! Make a garment inspired by an accessory.
After my plans for a skirt fell apart, I made the “These Boots Are Made for Walking” Dress as a tribute to my favorite cowboy boots. It was featured in The Sew Weekly’s Daily Spotlight for Thursday. You should’ve seen me…you would’ve thought I’d won the Miss America Pageant. 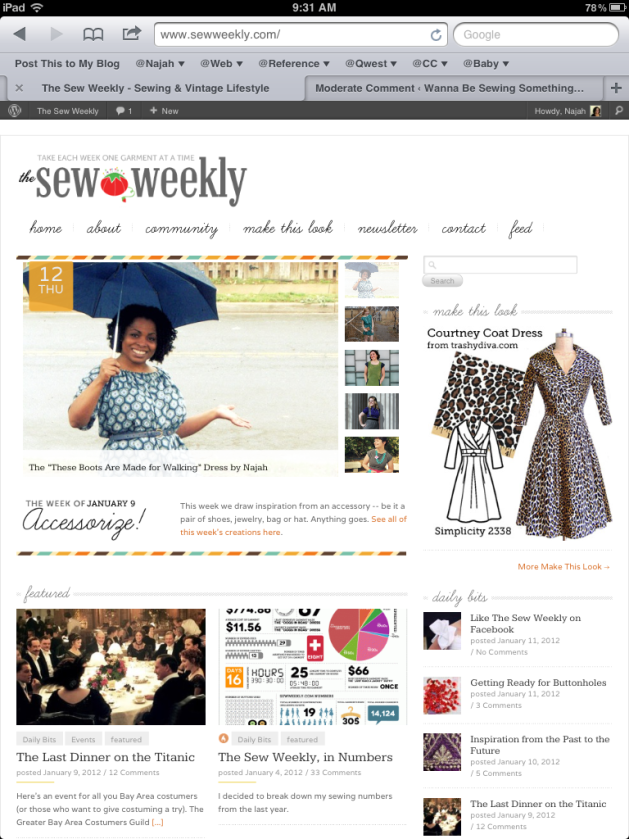 Week 3 Challenge: Buttons.
I tackled button loops for the first time and made the “Not My Gumdrop Buttons!” Vest and a matching hat.

Week 4 Challenge: Make a garment from the Make This Look archive.
My “Bird-less Garden Tour” Dress turned out better than the original.

Week 5 Challenge: Down Under. Sew something inappropriate for the current season.
I got the bright idea to sew swimwear and made the “Beach is Closed for Winter” Bathing Suit. It turned out to be a terribly stubborn, but useful prototype.

Week 6 Challenge: UFO. Make an “un-finished object”.
I made and fell in love with the “Likeable Librarian” Blouse.

Week 7 Challenge: Red. A tribute to Valentine’s Day.
The “Hip to Be Square” Top was a 1-hour miracle and rescued me from forfeiture.

To see all of the awesome Sew Weekly contributor creations for 2012 so far, visit the links below:

Seven weeks of cutting, altering, sewing, photographing, and blogging. I’m tired and invigorated. There’s hardly any time to admire (or tweak once complete) one’s work. Once it’s photographed and blogged, it’s on to the next one. Speaking of next things….on to them I go. 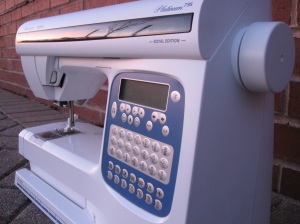 Over the next 300+ days, I’ll  be spending most of my spare time with this fella. I anticipate lots of cursing, bad posture, and occasional elation (when things actually go right). Luckily, my sewing space has its own door to protect the outside world from my out of tune sing-a-longs and bouts of rage from unpicking seams.

On the bright side, I won’t be alone as I’ve joined over 100 other ladies contributing to The Sew Weekly. Each week, we sew a garment based on a provided theme and post it for the world’s enjoyment. Signing up as a contributor is just the adventure I needed to build up my sewing skills and finally sew the custom wardrobe I’ve dreamed about.

This blog will chronicle my attempt. Needle is threaded and hopes are high. Thanks for looking in on me every now and then.

Hey, there...
I'm Najah. I write about my experiences making my own clothes and love to dialogue with other like-minded "sewcialists". Read more... 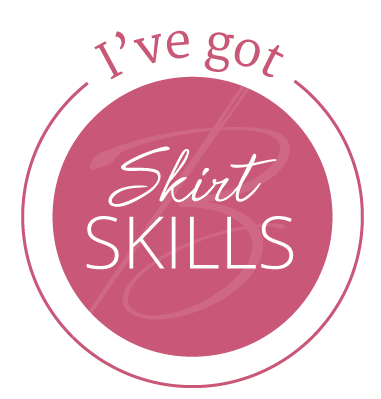